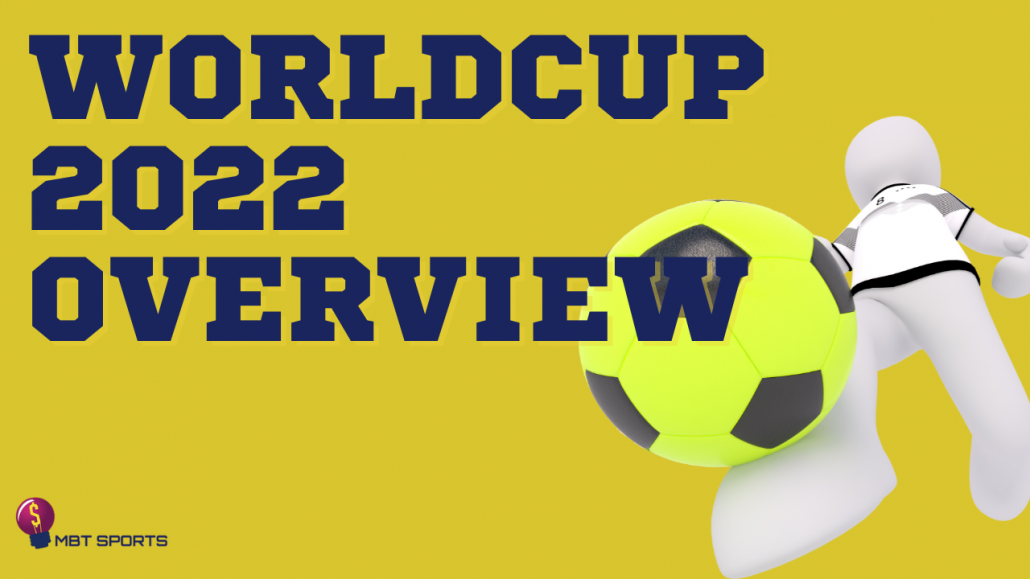 [00:00:00] Welcome to the MBT Sports channel. In this video we are going to give you an overview of the upcoming FIFA World Cup 20 22 tournament to be held in Qatar later in November.

[00:00:08] Before we get into the subject of this video if you want to learn more tips about sports trading strategies, make sure to follow our channel and click notifications to receive notifications so you never miss anything we upload.

[00:00:36] There’s no random last 16 draw, fee fa rules state the last 16 is a fixed and seeded draw. The winners of the Groups play the runners up in another group, and each team plays once in the knockout round. The winners progressing to the next knockout round, until the final. Where the winning semi finalists battle it out, to become World Cup winners of 20 22.

[00:00:55] Just as in regular tournaments the bookmakers will be running all the usual football betting markets. [00:01:00] Such as win draw win, bet builders, Asian handicap markets, corners, cards, 1st and 2nd half markets, player markets and so on.

[00:01:35] As you’d expect there are some big teams in these groups and on form at least most of the long established and former tournament winners should be able to progress out of these groups into the knockout stage.

[00:02:24] Group E features two former world cup winners from Europe and what many consider to be the strongest team in Asia at the moment.

[00:02:34] Spain and Germany need to be wary of Japan who won their qualifying pool with a seven point gap over Australia.

[00:02:44] Costa Rica came through their own group of death in 20 14 – featuring England, Italy and Uruguay – their run ending at the quarter-finals stage.

[00:02:56] If you’re thinking about placing some bets or trades on the tournament, you’ll need some [00:03:00] pointers or rules to guide you. Here’s some we recommend you consider.

[00:03:03] Use bookmaker promos and sign up bonuses to create Matched Betting opportunities. Use in markets where there’s just two outcomes and back both; one with your own stake and one with the bookies bonus or promo.

[00:03:13] Use statistics to help with identifying potential markets or results. There’s a number of established stats sites that can provide World Cup stats, search for the phrase 20 22 World Cup stats in your favorite search engine.

[00:03:25] Another tip is to use short odds multi selection accumulators. Using a few smaller bets you can combine them to create bigger odds and potentially more regular profits.

[00:03:45] Here’s a really obvious tip for you. Trade or bet, on what you know. What strategies are you most comfortable with? Which systems do you have the best research and stats for? What teams are you most familiar with? It’s a short tournament, relatively speaking, so you shouldn’t try to know about all the teams or players.[00:04:00] Stick with what and who you know.

[00:04:10] So what markets should you be looking at? Here’s some markets we especially like.

[00:04:14] There are eight different groups to bet on at the World Cup, so this market offers you plenty of different opportunities. You could even place an eight-fold accumulator including all of the group winners.

[00:04:23] Of course, some will be harder to predict than others. Be particularly careful when betting on any ‘Groups of Death’, as these are always fiendishly hard to anticipate. This time around, there isn’t a distinct ‘Group of Death’ as such. While two of the favourites, Spain and Germany, have been drawn together, both will be expected to progress from their group with style.

[00:04:40] There are several evenly contested groups, including Groups B, F, and H, but we’d argue that Group G containing Brazil, Switzerland, Serbia and Cameroon is the toughest to predict.

[00:04:55] When making your selections for this market, there are a few things to consider. First and foremost, [00:05:00] you need to research both teams. If they are both prone to low-scoring games, a bet of under 1.5 goals is smart. However, if there is a free-flowing attacking team involved, you are best to bet the other way.

[00:05:11] Situational factors are also important. If you are betting on a group game in which a draw will send both teams through, it is likely to be a cagey affair. Meanwhile, a match involving two sides with nothing to lose will be more open.

[00:05:23] World Cup betting is perfectly suited to the Draw No Bet market, as it allows you to bet on one of two outcomes of a match instead of three.

[00:05:46] This is one of the most exciting World Cup betting markets around. Here, you are trying to predict which team will win the entire tournament.

[00:05:53] Backing a winner can add another reason to get behind your favoured team or keep you engaged in the competition when your favourite side is knocked out. [00:06:00] You need not place this World Cup bet before the tournament starts, either – if you like the look of a dark horse after a few matches, you may be able to get a good price on them winning the whole thing.

[00:06:12] We at MBT Sports can see the heat outside the stadiums having as much impact on results as the form and quality of the teams. We think teams use to warmer climates will do better than the North European sides.

[00:06:23] Our pick to win outright is Spain, provided they can get out of the group stage. If they don’t make it, then surely it has to be Brazil?

Good luck in your sports trading and remember: ‘Stop Gambling and Start Trading! 😊

Until next time… Thanks!

Commit To Success – We Are Part Of Your Team,